Yes I noticed it was only 5.0 too! (I imported the "5.1" WAV into my audio editor to convert it to flac, and saw that the subwoofer channel was empty".
Is this a special Dadwater mastering error?
Post Posted Wed Apr 21, 2021 2:02 pm

So I gave Amazönia a spin and...yup it's a very different album. No clear melody in sight anywhere.
My very first thought when I listened to a snippet of Amazonia it made me think of Volcanic Dance from the concert "Legends Of The Lost City" back in 1992. Some strange animal sounds and thunder bangs here and there.
I like the last 18 minutes the most because it sounds closest to the "classic" JMJ, kind of Ethnicolor, MF1 transition and the likes. Curious thing on the center sticker of side D it says 0 rpm. I'm not too sure I would've wrote anything at all as it's a blank side.

All in all I appreciate a release that cuts off a bit from the rest of the after millennia JMJ.
I couldn't care less about multi channel surround sound and stuffs like that right now because I've just moved from apartment to a house with kitchen/living room "all in one L-shape" solution so I haven't figured out where to put surround speakers. I just have front speakers + center + sub and I'm perfectly satisfied for now. We only got 1 pair of ears.
PS/ I'll never get used to the "Sony Music" marks on everything released these days. It feels well...somewhat "cheap". 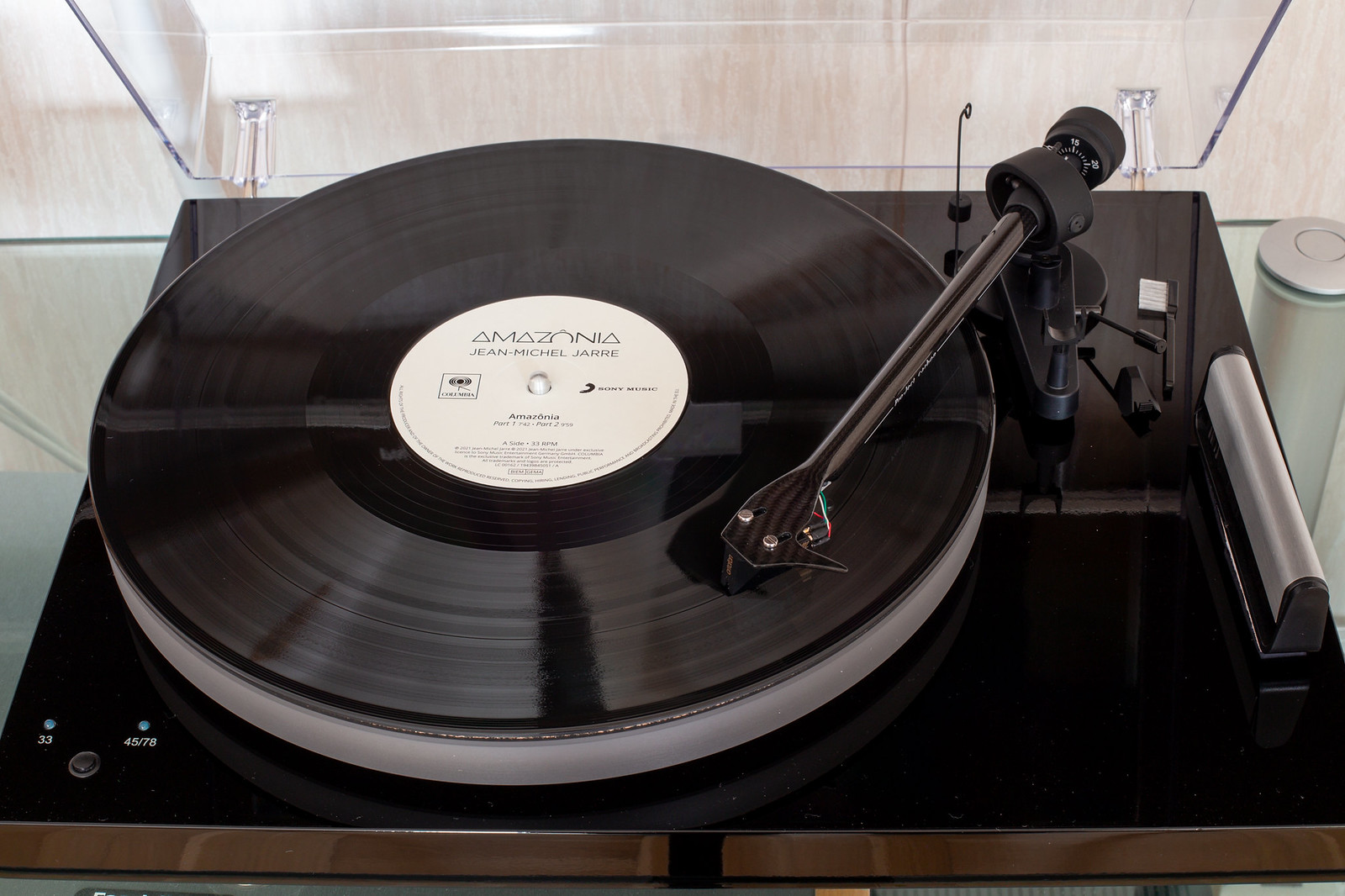 Velodynamic wrote: ↑Thu Apr 22, 2021 5:05 pm .
I couldn't care less about multi channel surround sound and stuffs like that right now because I've just moved from apartment to a house with kitchen/living room "all in one L-shape" solution so I haven't figured out where to put surround speakers. I just have front speakers + center + sub and I'm perfectly satisfied for now. We only got 1 pair of ears.

Dude, that's literally *why* we have a pair of ears (or "pinnae", to use the anatomical term)

- those funny shaped cartilage flaps on the side of your head are a pair of spatial-sound decoders.
Post Posted Mon Apr 26, 2021 9:56 pm

Amazonia gets a small review on Belgian TV station RTBF. 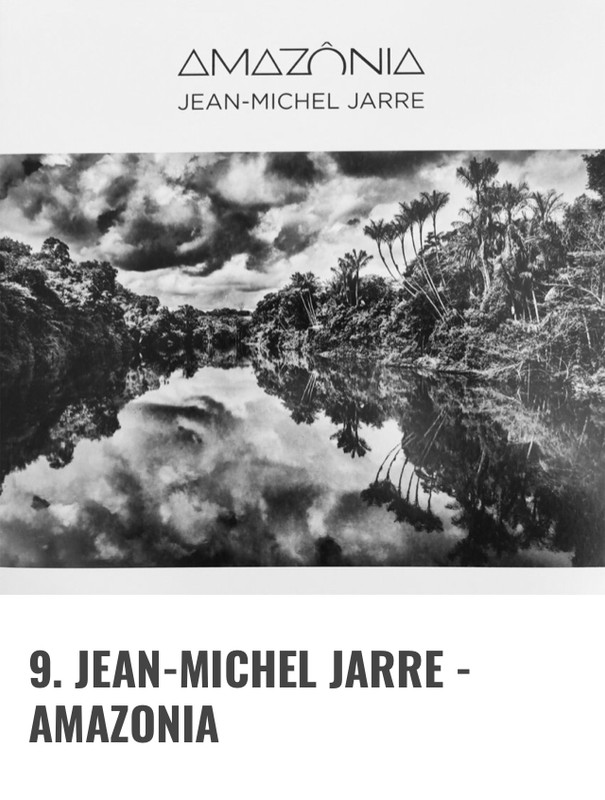 10 new albums that oppose all forms of war

As a possible coup loomed for the "Trump of the Tropics", Brazilian President Jair Bolsonaro, French electronic music pioneer Jean-Michel Jarre released his new album, which focuses on the destruction of the Amazon rainforest. Jarre, the 72-year-old son of a French resistance fighter, released the April 9 album to accompany a project featuring testimonials from indigenous people on the need to save their culture and environment from the likes of Bolsonaro, who has opened up the Amazon for development. It came as Indigenous people protested against deaths in custody in Australia.

Vinyl Club did a review of the album in a forest

In Hungary, the album reached the peak position at #33 on the chart.
Anyway, I do like this exclusive album, however it could have been more worked out. It sometimes really sounds like sound collage.
Post Posted Tue May 04, 2021 8:44 am

Robi83 wrote: ↑Tue May 04, 2021 7:26 am In Hungary, the album reached the peak position at #33 on the chart.
Anyway, I do like this exclusive album, however it could have been more worked out. It sometimes really sounds like sound collage.

Agreed. Every time I think something interesting is happening musically, he switches to something else.
https://popcorn-song.com
https://jeanmicheljarre.nl
Post Posted Tue May 04, 2021 11:58 am 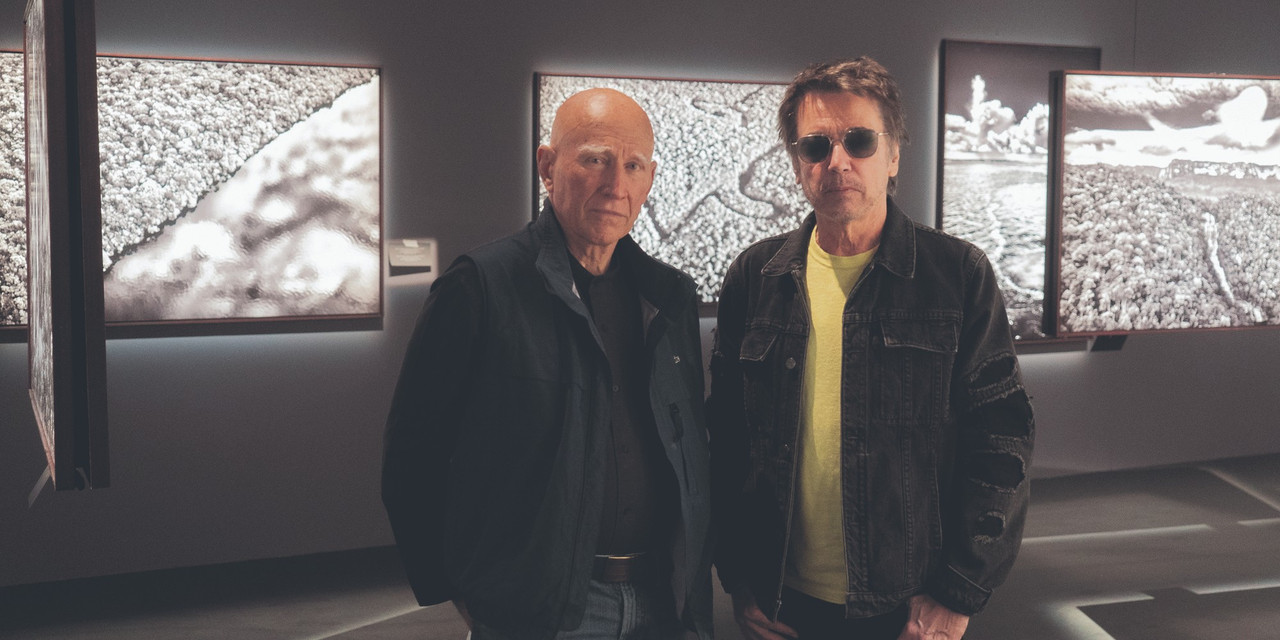 "I have never been to the Amazon but I intend to take you there to the Philharmonie", laughs Jean-Michel Jarre about Amazônia, the 52-minute musical score composed as a sound environment for the next exhibition Sebastião Salgado event at the Philharmonie de Paris. A commission work apart in the career of the creator of Oxygene and the result of which, today, delights him.

“It's not a synchronized soundtrack like in a movie,” he explains. “It's music that has to work no matter what photo you are looking at, because in an exhibition you always move around. random. The sounds are no different in the noisy and unpredictable Amazon rainforest. The peculiarity is that they are all independent of each other: a bird sings, the wind blows in the leaves, an animal passes by, a fire crackles, it forms a global harmony and always in motion. "

EXCLUSIVE. Photographer Sebastião Salgado: "Music is in my blood

The Brazilian photographer tells of his love for opera and for the compositions of Villa-Lobos or his friend Chico Buarque. At the Philharmonie de Paris, he will exhibit 200 photographs of the Amazon accompanied by a creation by Jean-Michel Jarre.

The exhibition was conceived as a dive into the Amazon rainforest, with a very unique scenography articulated around a half-light where the photographs serve as light wells, bringing life. To support this impression, we wanted a sound environment with water, rain, wind, animals, etc. It was Jean-Michel who did this work from the sound archives of the Museum of Ethnography in Geneva, unrelated to the usual music for which he is known the world over.

English subtitles too, excellent! (could be translated though,I have to watch the video tonight)
https://popcorn-song.com
https://jeanmicheljarre.nl
249 posts