JMJ created the music to the vision of Sebastiao Salgado
Jean-Michel Jarre has composed and recorded a 52 minute musical score for ‘Amazônia’, a new project by award winning photographer and filmmaker Sebastião Salgado, for the Philharmonic Paris. The exhibition launches on April 7th and will later travel to South America, Roma and London…
‘Amazônia’ is an immersive exhibition focussing on the Brazilian Amazon, featuring more than 200 photographs and other media by Salgado. He travelled the region for six years, capturing the forest, the rivers, the mountains and the people who live there, and most of the work will be seen publicly for the first time. At the heart of the exhibit is an invitation to see, hear and think about the future of biodiversity and the place of humans in the living world.
JMJs accompanying sound-creation is a symphonic world which will engulf visitors to the exhibit in the sounds of the forest. Using a blend of electronic and orchestral instruments with other real-life natural sounds, the score has also been recorded in binaural audio, for a truly immersive experience.

“I wanted to avoid the ethnomusicological approach, or creating background music. So I conceived a sort of toolbox containing musical elements - orchestral and electronic - intended to recreate or evoke the timbre of natural sounds, to which I added sounds from the environment, and finally ethnic sources (voices, songs, and instruments) from the sound archives of the Ethnography Museum of Geneva (MEG). I approached the Amazon with respect, in a poetic and impressionistic way. I chose the vocal and sound elements in their evocative dimension, rather than trying to be faithful to a particular ethnic group. It seemed interesting to me to fantasise the forest. It carries with it a powerful imagination; for both Westerners and Amerindians. This music also evokes a form of nomadism, as if sounds appear and disappear during a migration. It was necessary to go back to the principles of orchestration of the sounds of nature, to work from sounds which follow one another randomly, but which can compose a harmony or a dissonance. And as in any symphony, the work has moments of clarity or tension.” - Jean-Michel Jarre 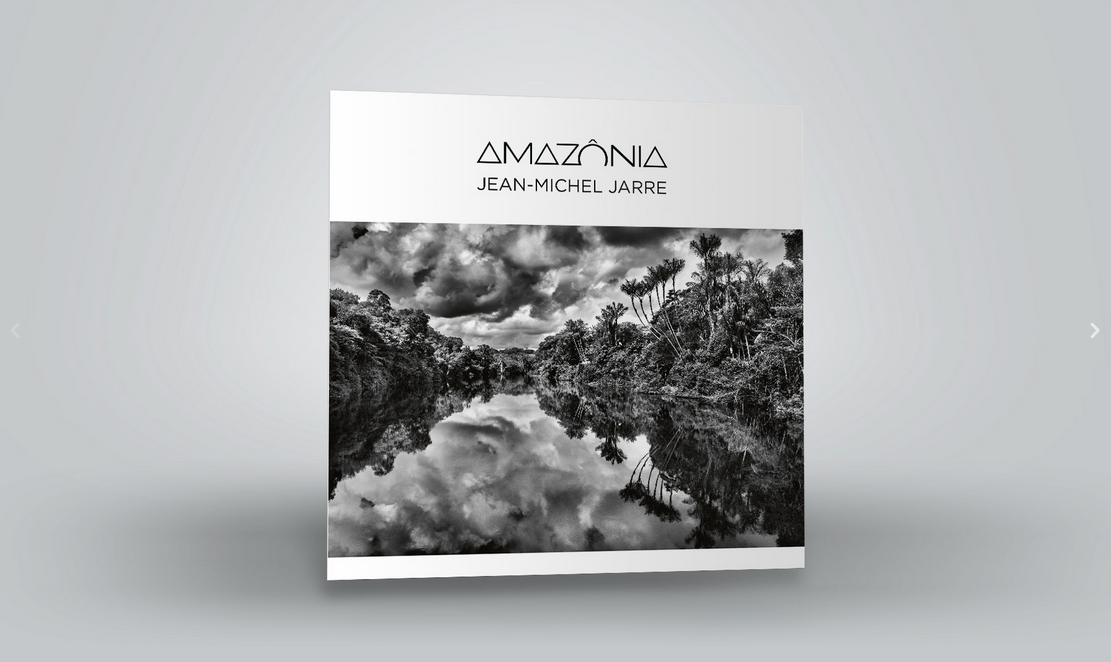 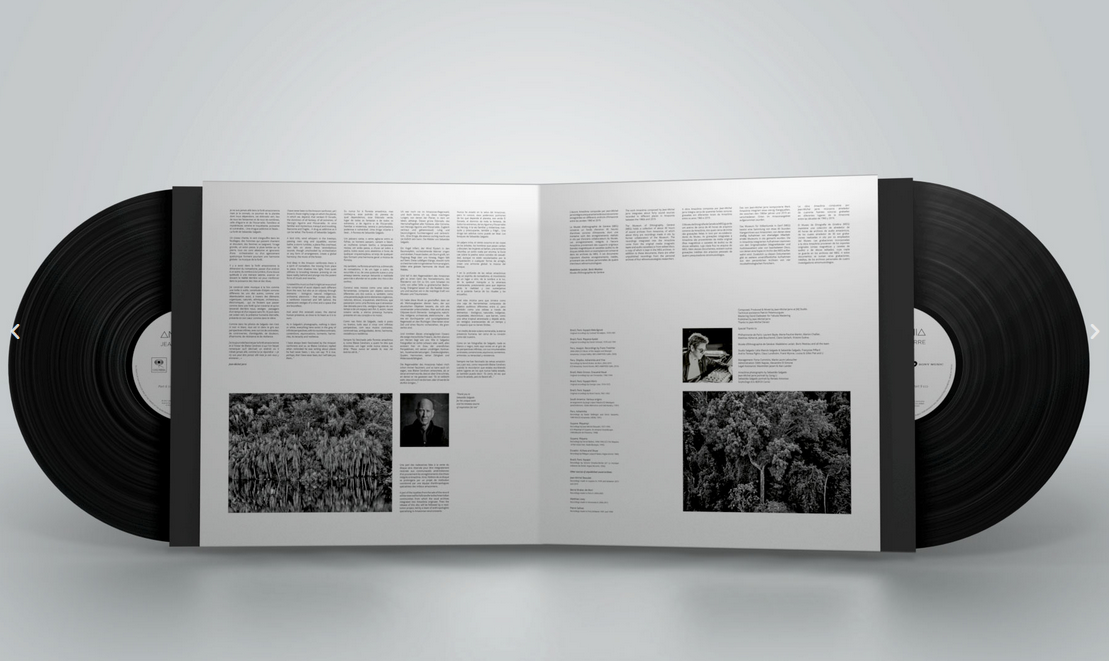 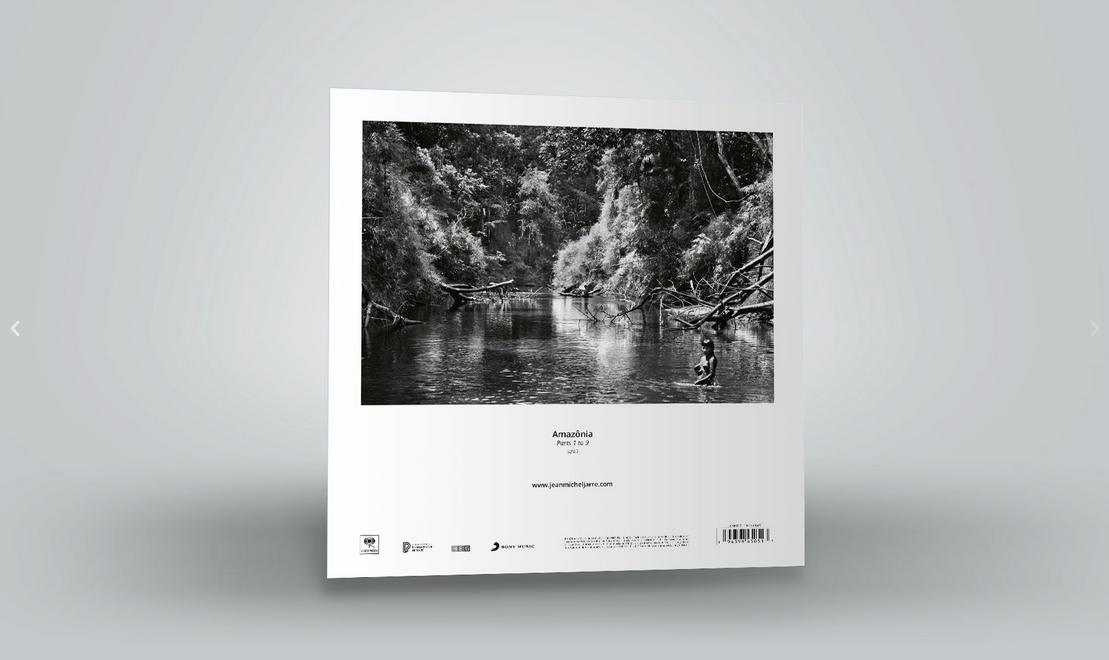 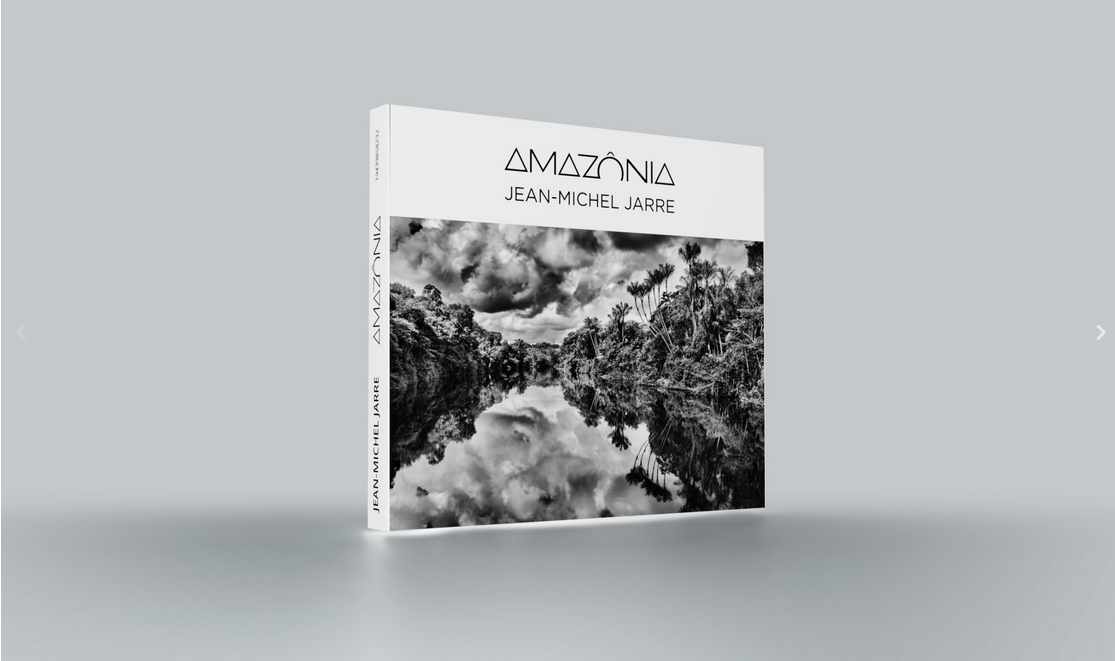 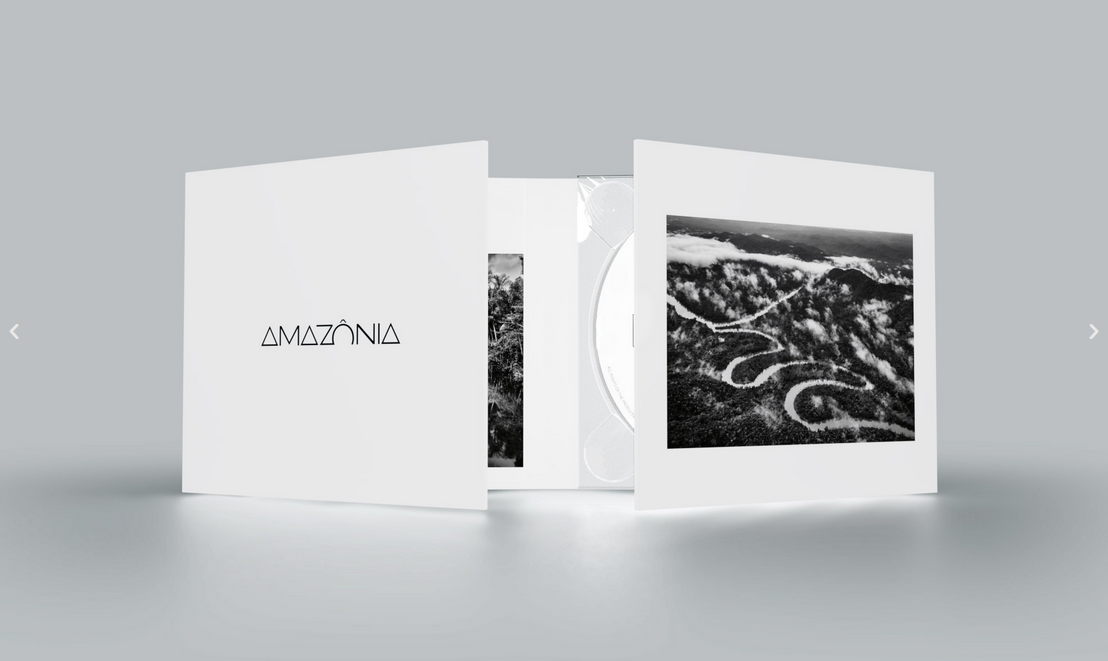 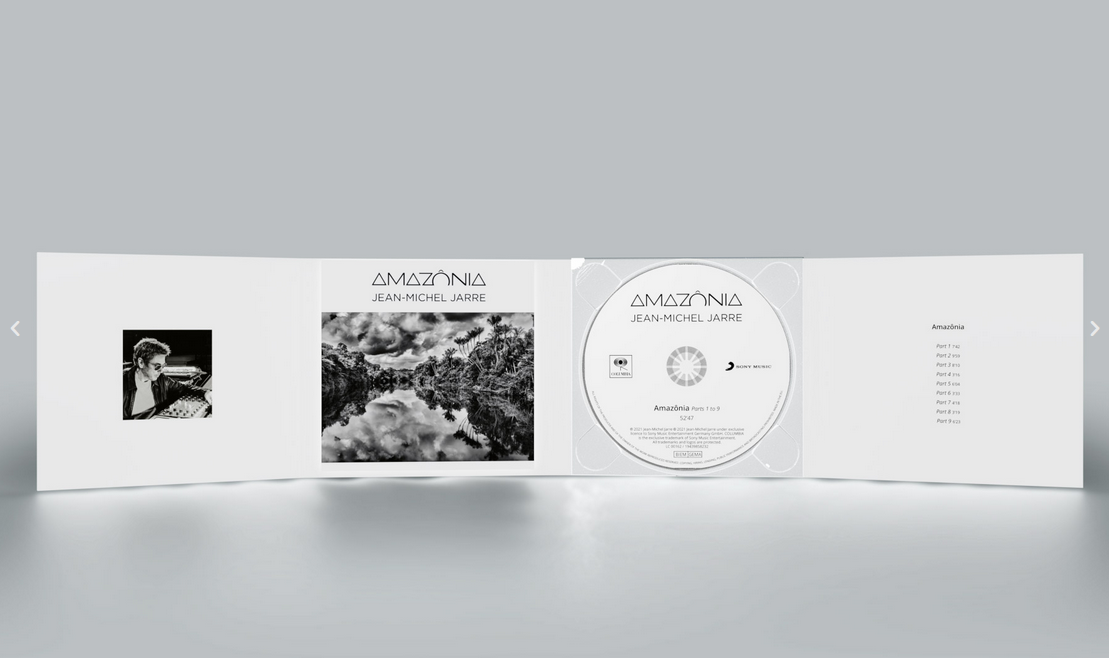 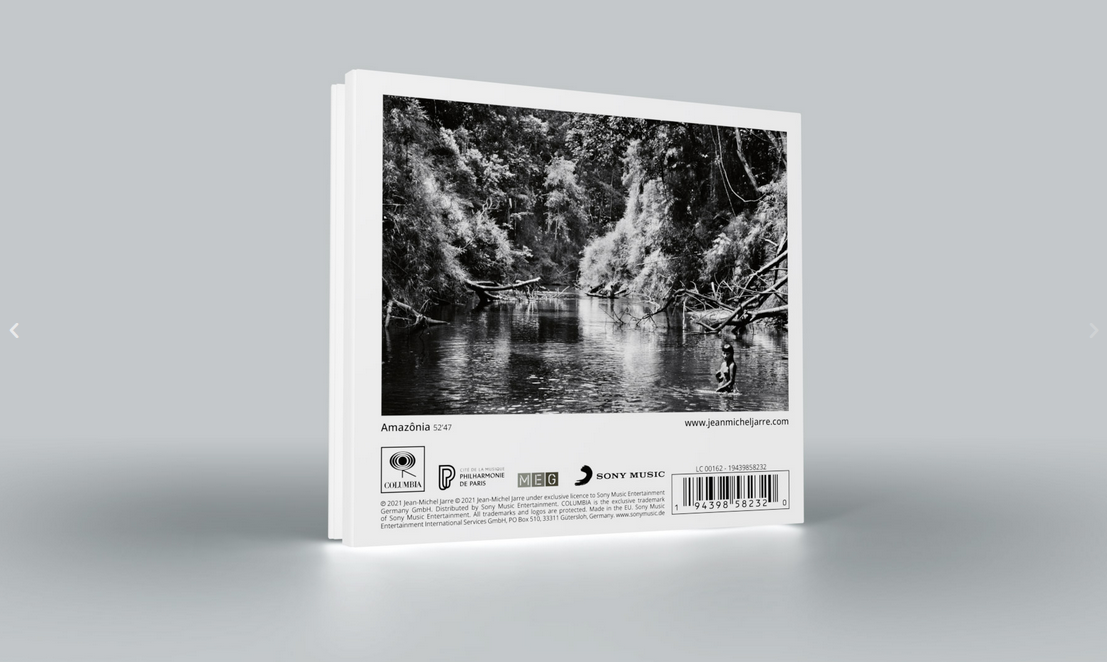 Hear the difference between standard and binaural audio in the video below. 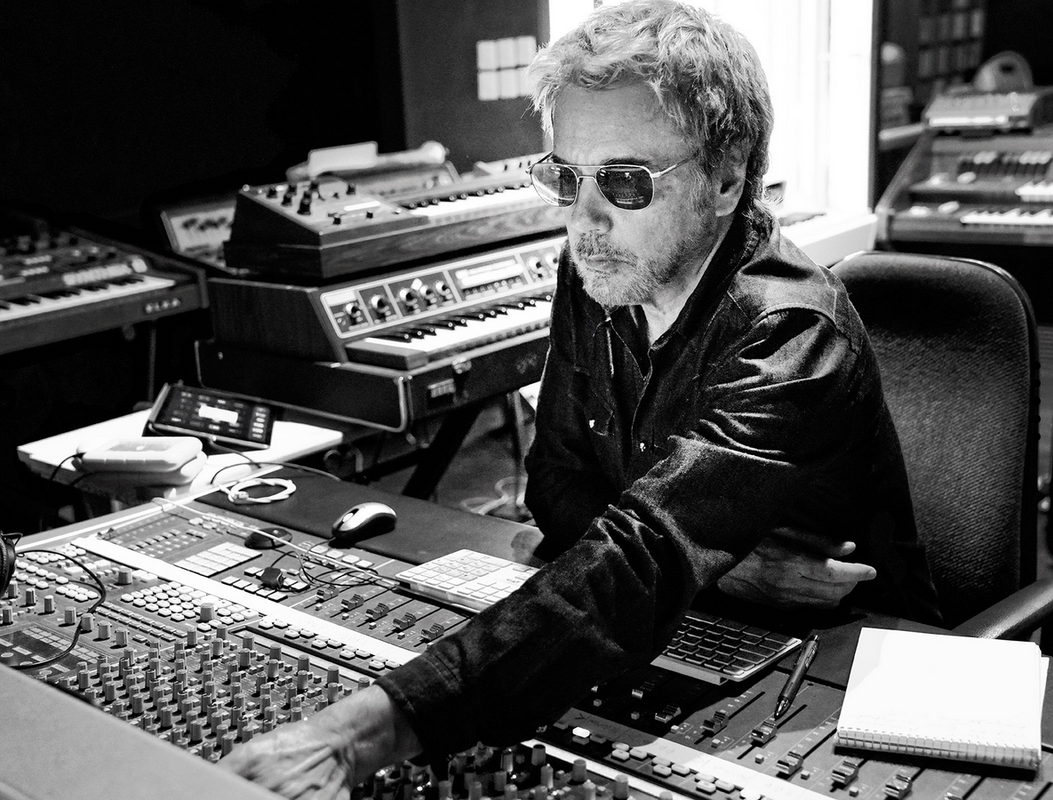 For seven years, Sebastião Salgado immersed himself in far corners of the Brazilian Amazon, photographing the forest, rivers and mountains, and the people who live there. On his journeys deep into this realm—where the immense power of nature can be felt as in few places on earth—his photographer’s eye captured striking images, most being shown here to the public for the first time.

Accompanied by an original soundtrack—a ‘symphony-world’ created by Jean-Michel Jarre using concrete sounds from the forest—the exhibition also gives voice to the indigenous communities photographed, via their testimonies. 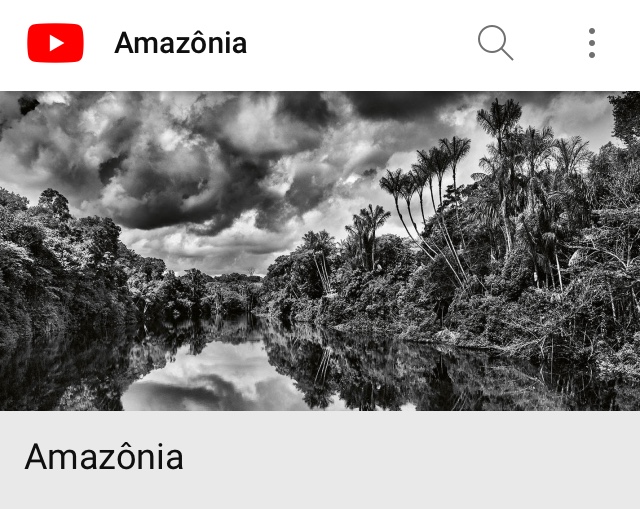 My new album AMAZÔNIA is out today. I was immediately intrigued by the invitation to create a special composition to accompany the exhibition of Sebastião Salgado’s great work as I am a huge admirer of his vision and relentless contribution to preserve the Amazonian forest. I wanted to avoid the ethnomusicological approach, or creating background music. So I conceived a sort of toolbox containing musical elements - orchestral and electronic - intended to recreate or evoke the timbre of natural sounds, to which I added sounds from the environment, and finally ethnic sources. I composed Amazonia in one go, day and night, in front of Sebastiãos photos scrolling in a loop in front of me, immersing myself in this immensity, familiar and mysterious, serene and disturbing, powerful and vulnerable... Sebastiao Salgado's forest.
I hope you will enjoy this voyage and if I may recommend - listen to the binaural version on your headphones. It is a completely different experience (available to stream or via download code inside the CD & Vinyl). https://jean-michel-jarre.lnk.to/Amazonia
This is a very special album for me: I hope you will enjoy it and that it will contribute to your awareness of the urgent need to conserve this incredible piece of our planet that is AMAZÔNIA.
#AMAZÔNIA #SebastiãoSalgado #UNESCO 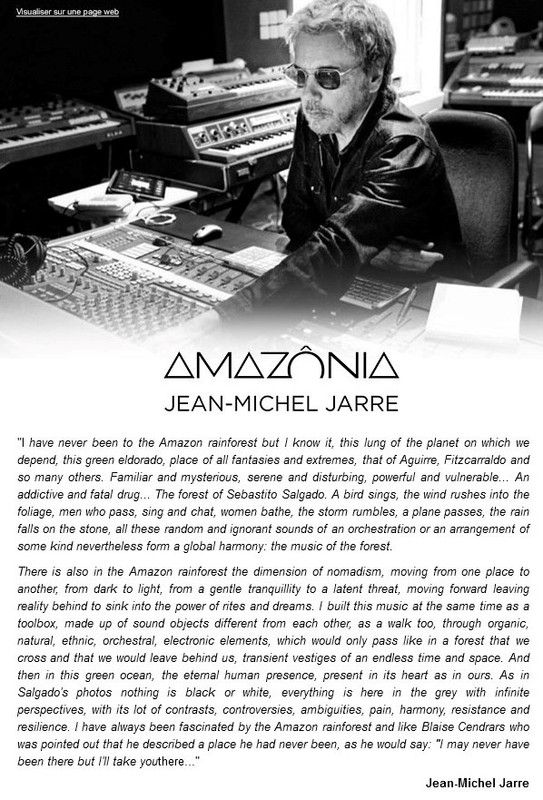 Thank you @deezer for making AMAZÔNIA your electronic album of the week globally. Listen to it now here https://deezer.lnk.to/EAOTW
How do you all like it so far? 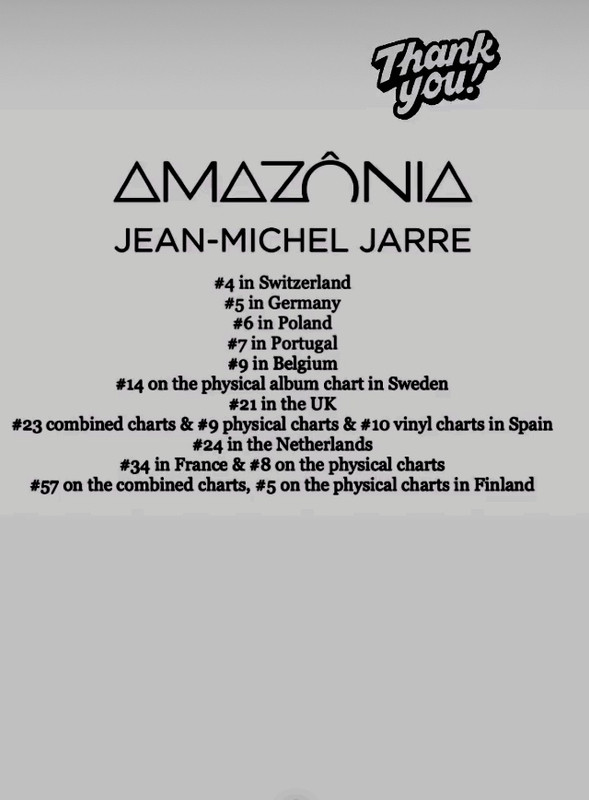