Jean-Michel Jarre unveils a first single from his next album
The French guru of electronic music signs us with the industrial techno of “Brutalism”. A frenetic taste of “OXYMORE”, his new album scheduled for this fall.
A project accompanied by a whole world in virtual reality
Jean-Michel Jarre says he is inspired by “immersive worlds and metaverses”, which he considers as “new territories that offer unprecedented possibilities for sharing and receiving music”, and wishes to create an “immersive” disc with OXYMORE. , designed in multichannel and 3D spatialized sound, which will be accompanied by a world in virtual reality: the well-named OXYVILLE . The Lyonnais artist explains this second project as “ a virtual metropolis dedicated to live concerts and music ”, which could constitute “a breeding ground for new musical experiences, as well as a means of democratizing new production tools for young creators. .” Jote wrote: ↑Fri Aug 26, 2022 4:36 pm Good to know that the DEFAULT format will be classic STEREO, and that gimmicky binaural will be just a bonus download.


On OXYMORE I wanted to do a few collaborations with young and established artists. I hope there will be some fun surprises in the mix for you. Colabs won’t be on the album and for now only available to stream and download. For the roll out I´m delighted to announce Martin Gore.

From great haunted melodies to extreme experimentations Martin Gore is one of the most eclectic electronic music composers. His unique touch in Brutalism Take 2 shows it. It has been a real pleasure and honor to collaborate with you Martin!

You can listen to the full track from Friday and pre-save it here
https://forms.sonymusicfans.com/campaig ... 2_presave/
https://popcorn-song.com
https://jeanmicheljarre.nl
Post Posted Tue Sep 06, 2022 7:53 pm

Gave the single a listen, and while I quite like it, it suffers the same problem as (iirc it was) Switch on Leon in Electronica 2. There's interesting stuff going on, but the track builds up to absolutely nothing in the long run and just kinds of ends without much of anything. Still really curious about the rest of the album, it's very much possible that it's just a poor choice for a single. Curious when the next single will be!
27-11-10: Ahoy Rotterdam
22-11-16: Heineken Music Hall Amsterdam
Post Posted Thu Sep 08, 2022 9:00 am

Speak of the devil

I liked that re-take a lot as it's full of details. A shame it won't feature on the proper album.
Aerozone / Jarre-live.fr / Jarre-fan / JMjarre Fan (english)
http://www.twitter.com/webringJMJ_fr
Post Posted Fri Sep 09, 2022 10:59 am

Agreed, this is a fantastic track which deserves a proper physical release. Maybe, with the other remixes JMJ promised (Deathpact was mentioned, let's hope he'll get some more superstar DJs), will there be a time and place for an Oxymore remix album? Odyssey Through Oxymore?
https://popcorn-song.com
https://jeanmicheljarre.nl
Post Posted Fri Sep 09, 2022 11:37 am 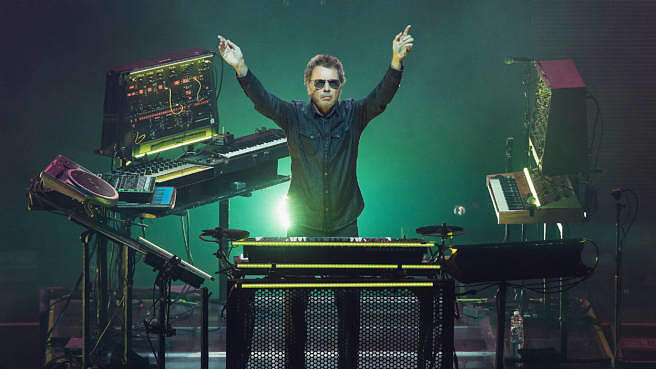 Jean-Michel Jarre and Martin Gore release "BRUTALISM Take 2"
Jean-Michel Jarre has teamed up with Depeche Mode's Martin Gore to release the single "BRUTALISM Take 2".
Jean-Michel Jarre has produced a new version of the single "BRUTALISM" with Depeche Mode 's Martin Gore. Jarre's new album, OXYMORE, will also be out on October 21st via Sony Music.
BRUTALISM Take 2 was released on September 9th. The track serves as a forerunner to upcoming LP OXYMORE, Jarre's 22nd studio album. It pays homage to the late French composer Pierre Henry and includes samples from his works provided by his widow. The label describes Jarre and Gore's work as a "dark and melodic journey".
"A real moment of upheaval"
The album also features a new recording technique: “This is a real disruptive moment for recording audio and sound. 'OXYMORE' is an attempt to explore new ways of linking technology and music. We now have technologies that allow us to explore composition in spatial sound, which opens up a whole new experience for us musicians in the creative process, ” says Jarre .
OXYMORE can be pre-ordered now. It will be available on CD, double vinyl and digitally in stereo, binaural and Dolby Atmos. In addition, the physical product contains a code that allows access to the binaural master in maximum quality.