Welcome To The Other Side

The album Welcome To The Other Side will be released on 1 January according to the Jean-Michel Jarre newsletter:
https://forms.sonymusicfans.com/campaig ... 2020-12-20

You can pre-save the album on Spotify, Deezer and Youtube and the tracklist will most likely be what is played on the concert tomorrow.

The CD/Bluray and Vinyl release, releasedate 10 september 2021, has a digital download code for the binaural version of the album in WAV format.
I've made a CUE file for you all, you can download it in this post:
https://zoolook.nl/forum/viewtopic.php?p=208634#p208634
https://popcorn-song.com
https://jeanmicheljarre.nl
Post Posted Wed Dec 30, 2020 11:25 pm

As I mentioned earlier when you Shazam the Oxygene 2 remix it turns up as "Jean-Michel Jarre - Oxygene 2 (JMJ rework of Kosinski remix)" from the album "Welcome to the other side".

The album will be actually a small compilation album ("mixtape", as JMJ put it in the chat) as - given the release timeframe - it can't be the audio from the actual concert (which wouldn't make much difference unless they add fake audience noises to the show this time?) I wonder if the tracks will be edited to sound exactly like on the concert (for instance we know that on concerts JMJ ditches the intro and adds a bonus chorus in Stardust).
airwolfthemes.com
Post Posted Fri Jan 01, 2021 12:25 am

Same as the concert's tracklist, no surprise there.
https://popcorn-song.com
https://jeanmicheljarre.nl
Post Posted Fri Jan 01, 2021 12:26 am

The album has the canned applause as well - I wouldn't be against it if it wasn't so poorly executed. It sounds like a sitcom :>

I wonder whether the Time Machine sounds EXACTLY the same as the concert performance :> If so then it pretty much means that the laser harp performance was pre-recorded earlier (since it managed to make it to the streaming services within minutes)

And apparently they couldn't get the track names consistent across services 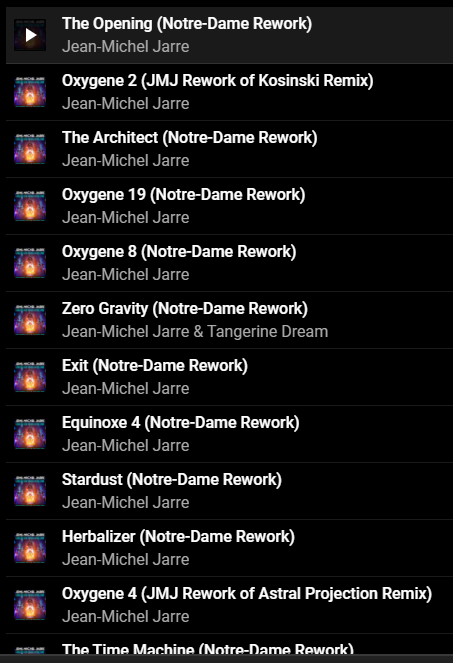 Spotify has them as "VR Live" 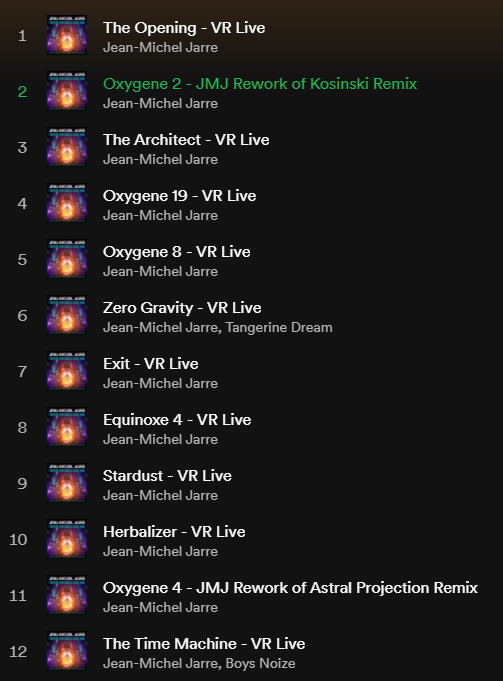 Jote wrote: ↑Fri Jan 01, 2021 1:30 amI wonder whether the Time Machine sounds EXACTLY the same as the concert performance :> If so then it pretty much means that the laser harp performance was pre-recorded earlier (since it managed to make it to the streaming services within minutes)

Oh yeah, the stream and album (Spotify, at least) have different-sounding laser harp parts (unidentical improvs), which is nice. In fact, I do like the (possible?) touch of the first notes of "The Time Machine" laser harp sounding very much like the original laser harp patch from the album version of Rendez-Vous 3.

So... while Concerts in China was largely recorded after the actual concerts... this one was recorded before :>

Couldn't they have waited a day to create the illusion that it's the audio from the actual show? (I know there are people who are convinced it's possible to deliver the audio within seconds to the streaming services, but come on)
airwolfthemes.com
Post Posted Fri Jan 01, 2021 10:35 am

I wonder why that "intro/outro" sound, this rolling track in the beginning, and WFC in the end, is not included in the downloads. As the "waiting" track at the start and before the first track is not that diversified, but has a pretty dark mood, I think. Too bad.
Post Posted Fri Jan 01, 2021 5:31 pm

(It does make me want to play a bit of Abe's Oddysee, though

True, but the other services I came across were streaming only (although Deezer seems to sell mp3s)
https://popcorn-song.com
https://jeanmicheljarre.nl
Post Posted Sat Jan 02, 2021 1:51 pm

I know, my point is that Qobuz offers both 44/16 and 48/24 and the first one is sufficient. As I said - it's not about the money, it's about storage space.
airwolfthemes.com
236 posts