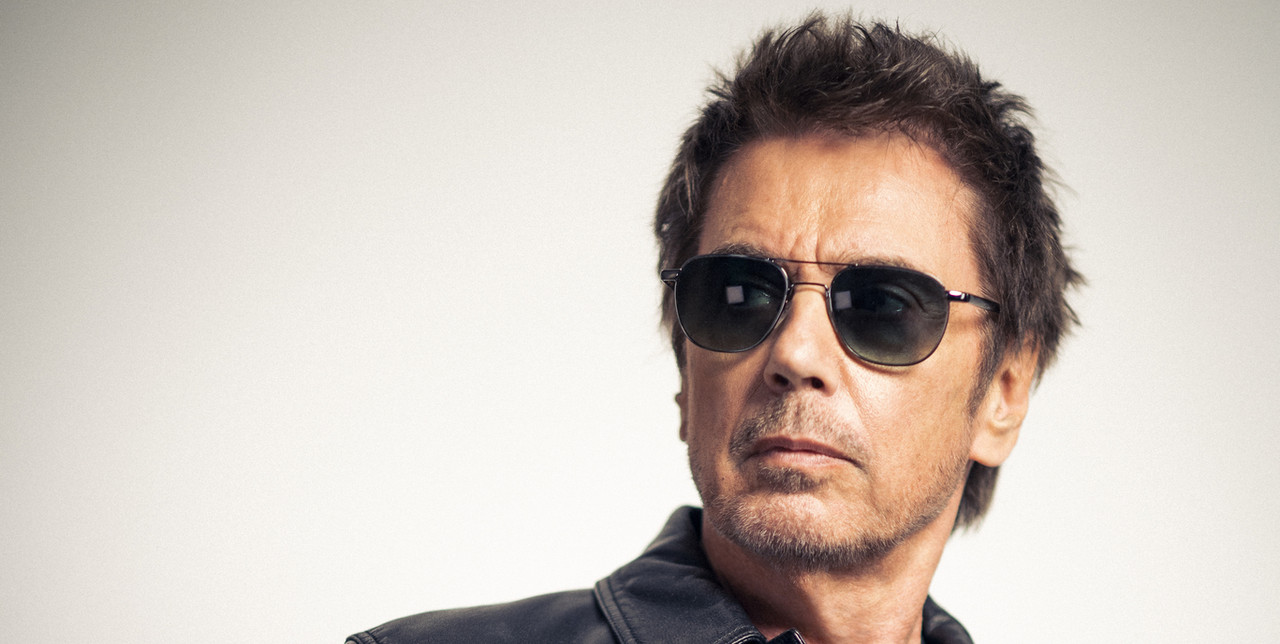 Jean-Michel Jarre, sponsor of the new MIDƐM+ 2023, will offer for the occasion several Live concerts in multichannel 360 of his new album OXYMORE in the Salon des Ambassadeurs.

OXYMORE is the first immersive musical project of this magnitude to go so far in audio innovation.

This album was designed and composed in multi-channel and binaural sound, and mixed in 360 audio in the Innovation studio of Radio France.
"Placing sounds 360 degrees in space like objects around you is a completely different way of composing, which is revolutionizing the conception, production and distribution of the music of tomorrow.

In real life there is no stereo, our audio field is 360 degrees. Today, technology allows us to explore composition in spatial audio and this opens up a whole new experience for us, musicians, in the creative process" specifies Jean-Michel Jarre .

OXYMORE is inspired by the French movement of concrete music, a genre of musical composition that uses recorded sounds as raw material.

With his new album, Jean-Michel Jarre takes up this concept and reinvents it using today's tools. It's a musical journey back and forth between analog and digital sounds.

One-man show with live concerts?
Come on. JM should think his performances over with partners!
Post Posted Mon Dec 19, 2022 2:46 pm 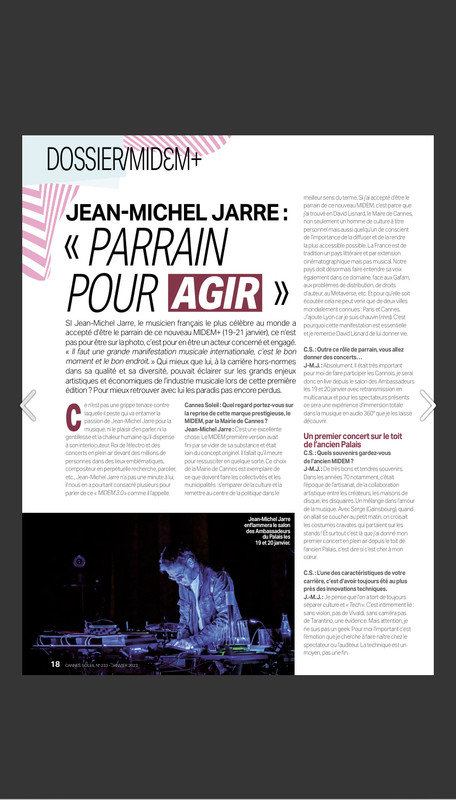 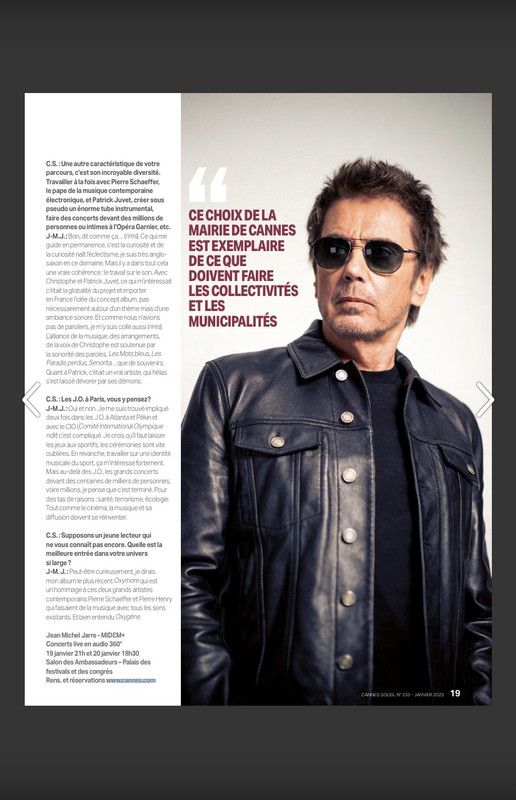 CANNES SOLEIL: THE JANUARY ISSUE IS OUT!

In the summary of your January Cannes Soleil:
the MIDƐM+ and the interview with Jean-Michel Jarre, sponsor of the event

The @midem is displayed in the metro at #Paris! See you from January 19 to 21 at #Cannes . 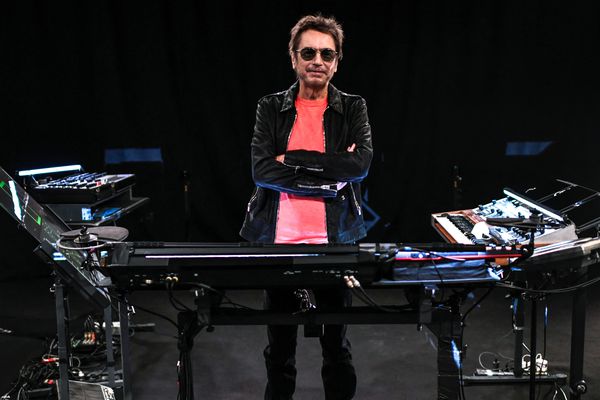 Jean-Michel Jarre sponsor of the new MIDEM in Cannes: "we must not miss the train of modernity"
Jean-Michel Jarre, godfather of the new MID? M+ 2023, will offer for the occasion several 360 multichannel Live concerts from his new album OXYMORE.
The music industry had missed him! After 3 years of absence, the MIDEM returns in an even more experimental form from January 19 to 21 at the Palais des Festivals in Cannes and becomes the MIDEM +. A festival sponsored by one of the pioneers of electronic music, Jean-Michel Jarre.
►January 19: live Jean-Michel Jarre
Who is better placed than Jean-Michel Jarre to sponsor this edition?
His name appeared as obvious in the eyes of the mayor of Cannes who had already met him. Jean-Michel Jarrre immediately agreed to take up the challenge of rebirth and novelty.
“The fact of putting the MIDEM in line with our time necessarily interests me as a creator. I want to participate in the renewal of this festival that had fallen into disuse. Do not miss the train of modernity. Moreover, my opening concert will be very innovative, because thanks to technologies, the audience will be totally immersed in the show.” - Jean-Michel Jarre
He is not at his try, because this artist has always invented, reinvented himself and has always been able to seduce his audience.
Especially with his third album "Oxygène" released in 1976 and sold 18 million copies worldwide.
This time, he will present his latest album " Oxymore" at 3 immersive concerts and with 360 multichannel sound. January 19 at 9 p.m. and January 20 at 6:30 p.m. for the general public - January 19 at 6:30 p.m. for professionals. 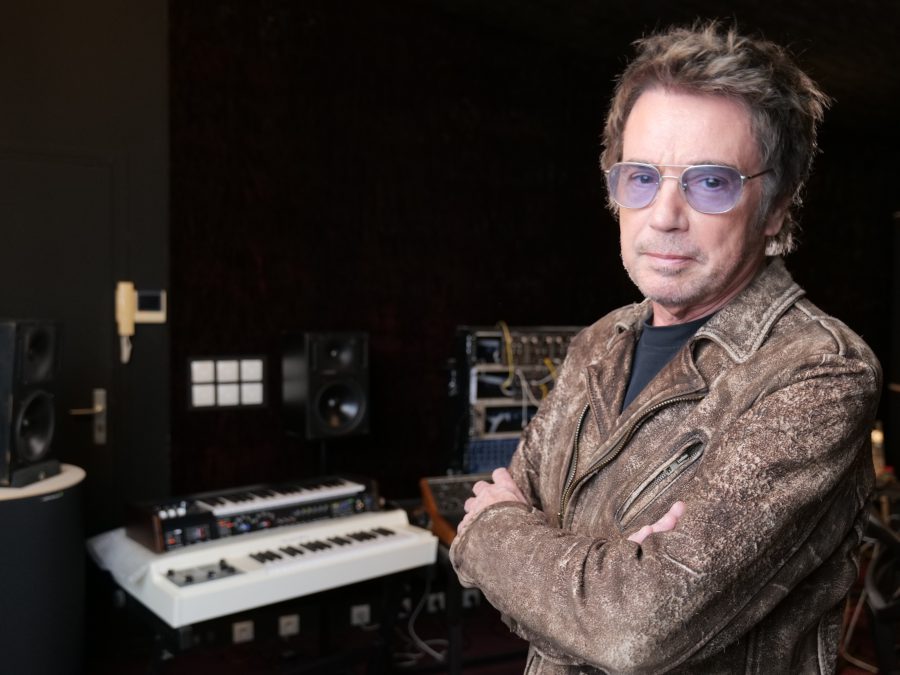 CODA Audio’s founder and MD, Svetly Alexandrov, is thrilled with the partnership. “Jean-Michel Jarre was someone I idolised when I was growing up,” he remarks. “I admired his innovative approach and willingness to experiment. He is a true pioneer in his field, and I think that is why we are such a good match. Innovation meets innovation.”

“The concerts in Cannes are just the beginning,” he adds. “More is yet to come, and Jean-Michel will be with us at ISE in Barcelona at the end of the month to reveal the next developments. The journey is only just beginning!”

Jean-Michel Jarre, sponsor of Midem+ focused on the world of tomorrow

Taken over by the City of Cannes, the Midem (International Record and Music Publishing Market) returns from today under the name Midem+. The 74-year-old musician, still as focused on extraordinary experiences and technology, is the godfather.

"A Midem 3.0 has its place and it's great that it can exist in France. When the mayor of Cannes asked me to be its sponsor, I accepted with joy. We share the same convictions." 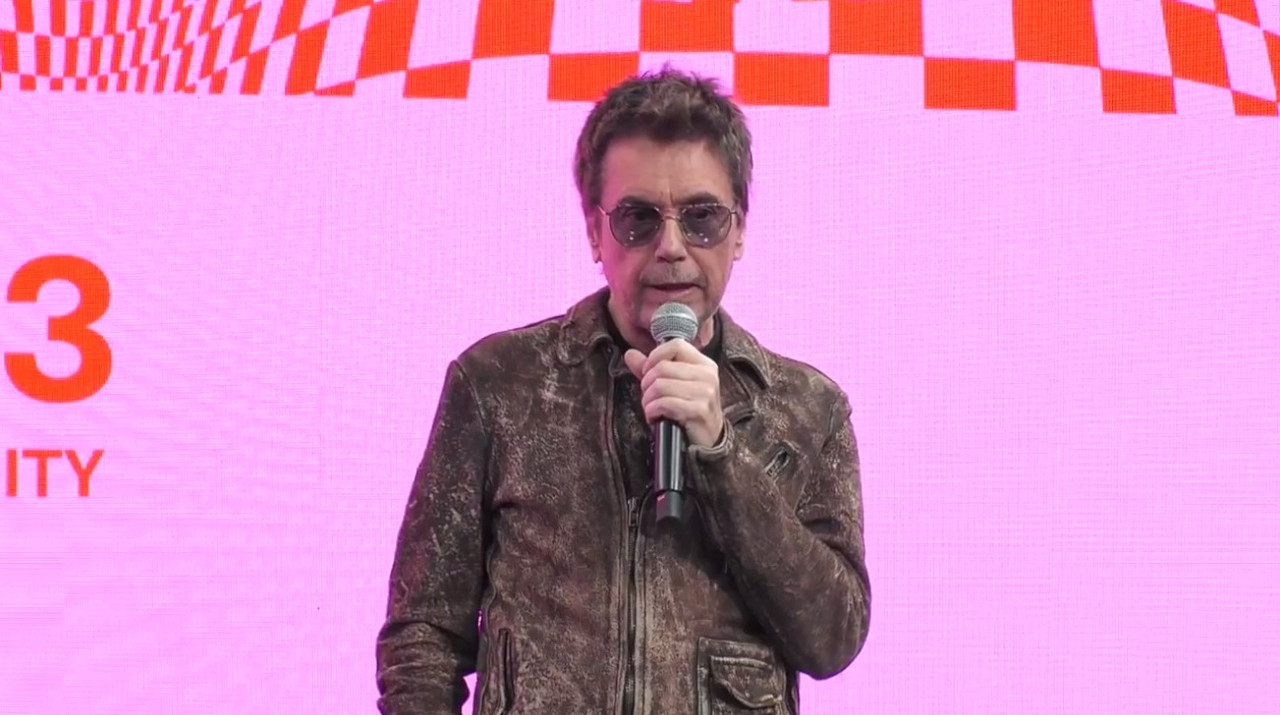 Jean-Michel Jarre is the godfather of the new Midem, the international market for the record industry which opens this Friday in Cannes.

Music of another kind at the opening of the midem tonight with Jean Michel Jarre, the godfather of the event at the helm. A few excerpts a little later #Cannes #CotedAzurFrance @CannesPalais @Cannes_France @VisitCotedazur @villecannes